A downloadable game for Windows

The Space Between by Christoph Frey is a surreal short narrative experience in three acts about the walls we build for us.

The architect Martin Melanson, commissioned to build a theater, meets a woman named Clara, outside of his apartment complex at night. Attracted to each other, they visit the theater's building site.
While they explore the unfinished stage, surrounded by scaffolds and lost in thoughts, reality slowly fades, where the curtain opens and a dark play about closeness and separation begins.


The game's drawn-out, static nature, embedded in blurred PS1 visuals, supports its surreal plot and dialogues to create a dreamlike 40 - 50 minute experience, that should be played in one sitting.

Controls:
W,A,S,D to move
Mouse to look
E to interact

"Overall, these stylistic choices come together in a thoroughly cohesive aesthetic whole, amplifying cinematic qualities similar to those of an Ingmar Bergman or Nicolas Winding Refn film." RE:BIND

"The Space Between is deliriously uneasy in its final moments, thanks, in large part, to a skin-crawlingly stellar score." Wireframe


There is an excellent three part dissection of The Space Betwee written by @cathroon for RE:BIND, which I highly recommend you to read AFTER playing it.
Part 1 | Part 2 | Part 3


If you liked the game and want to support me, you can do it on my Patreon.

In order to download this game you must purchase it at or above the minimum price of $5.99 USD. You will get access to the following files:

A beautiful and surprisingly powerful game.  The pacing of the dialogue is really interesting, because it forces the player to fill the space between words with their own thoughts.  I found that much of the game was happening in my head, rather than on-screen.  There's a surprising amount to unpack with all of the symbolism and motifs!

The soundtrack is beautiful, and I like the way you switched between different scenes/points in time; it felt 'edited' in the same way art-house cinema is.

This was an incredible experience I will not soon forget.

A brilliantly told story that left me with chills at so many points. I loved the writing, loved your take on perspective, intimacy and overall human connection.

At first I thought the pace was a bit slow, but by the end of it I appreciated every decision you made. I first wanted to be able to skip dialogue after reading it, but after it sunk in I realized how much it elevated every line, gave it so much more weight. I could be biased because it had so many themes that strongly resonate with me personally, but regardless, it struck true.

Love the way you tell a story. Great use of motifs, visual and otherwise. I'll be looking into more of your stuff Chris. Color me impressed.

Also commenting that a mac version would be awesome, hoping to stream this game at some point!

Really loved this game. The slow pace didn't bother me at all, it really drew me into the atmosphere and story. There's something so hauntingly beautiful that spoke to me in this game, something ineffable that really stuck with me. Easily one of my favorite games so far this year, just wanted to say thanks a ton for making it! Really hope you make more games in the future.

Thank you for your kind words! <3

Hey I just bought the game for 5.99 but didn't realize I needed to pay 7.99 for the soundtrack.

I really, really want the soundtrack for this game so is there any way I can get it without having to buy it all over again? I'm willing to pay the extra 2$ if possible.

I would really appreciate any help you can give me.

I love your work btw, keep it up.

Is there any reason you can't purchase with card?

There should be an option now to buy it with credit card.

Perfect! Looking forward to playing it :))

Thank you and I wish you a good experience :)

As a game, I find The Space Between... Mediocre? I'm not sure if I even should call it a game.

But as a narrative interactive experience - and it definitely should be interactive, or it (probably) couldn't be this kind of experience in the first place - it is very good. It is awesome.

The overall direction and sound design are amazing.

Thank you for playing it and for your feedback!
Yes gameplay in the sense of obstacle overcoming, challenges or competition were reduced to a minimum as they did nothing to support the experience. The game of imaginary play on the other hand was very important.
Yes, I would also call it an experience. Actually I would call it a game, since my definition of games is a bit broader, but I know that this is debatable.

Why is the game window so small? It's just a small square in the middle. And my cursor would not disappear while playing.

Normally it should not go into window mode, may I ask what is your desktop resolution?

As a heads up, I am experiencing the same problem with the same resolution as him

chachky, I sent you an email.

For what it's worth, I had this problem and was able to fix it by turning scaling in windows down from 125% to 100%.

Thanks. This solved the issue for me as well

Just FYI, I'm having the same problems - changing the scaling of my pcs hasn't fixed them.

Reply
The Fringe292 days ago

This game is more of an art form than a game, really good, cryptic and sombre, definately feels more like an experience .. really cool 🙂

I'm sorry, I could not finish this game - I found the slow pace of the dialogue excruciating, which was exacerbated by the fact that, during all dialogue sequences, you are locked to one position/viewing angle (for example, Multiple 10-second waits where all you see is a wall texture and the line "Hm..." with absolutely nothing else to do).

Walking down the theater while having a conversation could have been interesting, but I found myself very frustrated when, every ten steps, Clara would lock you in a dialogue sequence for Over a Minute to pontificate on whether the audience are performers (they are).

If I'm honest with myself, I would have just stuck it out to the end of the game, but I had a hunch that itch.io's launcher had auto-downloaded the oldest version, which it did - the 1.06 version is not the one people will be downloading with the launcher unless they select it manually. I had just watched the Extremely slow cremation sequence when I realized this and, hoping that the latest version would let me skip forward through dialogue at my own reading pace, tried to restart the game. Once I realized that I would then have to sit through the same dialogue for another thirty minutes, I had to give up.

To be clear: I absolutely do not want to just skip through dialogue, this subject matter is interesting to me as a performance studies academic. I would genuinely love to finish this game some day so I can think about it in its entirety, but it will be when I'm able to push forward at my own pace.

Thank you for playing the game! Yes it was a conscious decision to dictate the reading pace and to not let the player skip dialogues or cutscenes, I wanted it to be that slow and I wanted to selectively give and take interactivity. This did not change in v1.0.6, I know this is not for everyone. But thank you for pointing out, that the launcher automatically downloads v1.0.0! I'll try to change that.

I figured it was a conscious choice, but it makes the balance of interactivity severely imbalanced towards "take." The only interactivity I had experienced at all in the game up to the point where I had to stop for my own sanity was to slowly explore environments and find the button prompt. As I implied, if we'd just be able to look or walk around during these dialogues, the problem would be alleviated quite a bit - we're never locked to a view worth staring at. Another solution would be to give each dialogue a mandatory ~3 seconds, and after that give the user an option to press forward. 10+ seconds for how short these lines tend to be is, frankly, astounding.

Another cool addition would be to make sure each dialogue line is preceded by the name of the person speaking, or giving each person specific colors for their text. Sometimes when you press E on Clara, she is the one to start talking, other times it's you, so it sometimes takes a while to figure out who is saying what. If this is meant to evoke/expand upon some kind of "blurry separations between people/viewpoints" theme, it's not quite salient yet.

I'm not trying to be mean, I was really excited for this game when I heard about it, but I only have so much time to literally stare at wall textures before I need the game to move on.

I couldn't have said it any better.

No, of course you're not mean, everyone has certain preferences, opinions and ideas of how things should work. And for me it was crucial to have this drawn-out, slowed down, static moments, where you are thrown back to yourself. That's why Clara also has no idle animation, although I animated it. And trying to figure out, not knowing and deciding for yourself, who exactly is talking, was also part of the concept. In the game's case, user experience is part of the artistic vision and was not designed to maximize user productivity or activity, in the hopes that the user doesn't get bored. With this project, I am not interested in entertainment as an end in itself. Again, that's not for everyone, but than again, 45 minutes of attention time, even for this decelerated kind of experience, is what I expect from the audience. 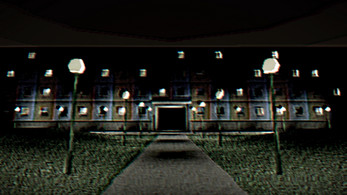 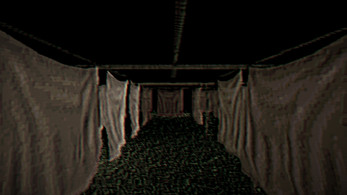 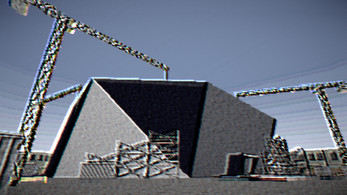 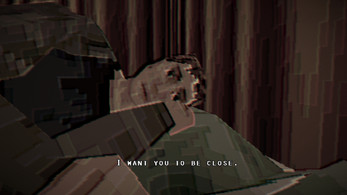 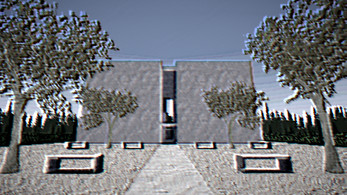 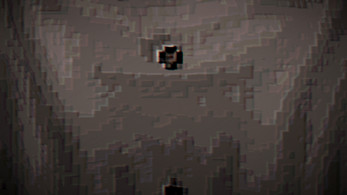 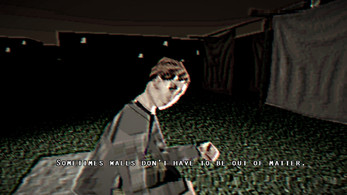 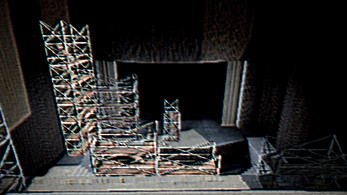 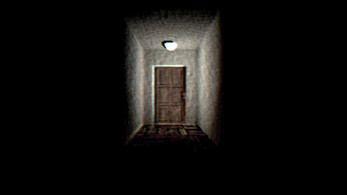 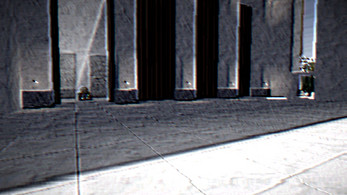 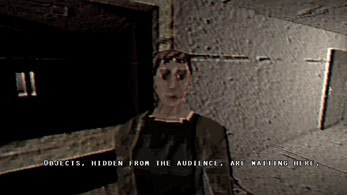 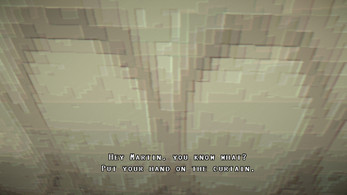